The Plot: Alanna, freshly-knighted, has revealed her gender to the entire court (right after she killed Creepy Roger, Duke of Conté). Rather than make waves, she decides to take Coram, her man-at-arms, and travel throughout the land. Her travels take her to the Great Southern Desert and the tribes of the Bazhir. When Alanna accidentally becomes a shaman of her tribe, she has to face the part of herself that she has long resisted: her magic.

The Good: The Bazhir are fascinating. Culturally, I think they’re closest to the ancient middle-eastern clans you learned about in 7th grade history, except (like most people in Tortall) they’re magic. They’re fierce, traditional and loyal. Sometimes they’re frustrating (especially when it comes to the long-standing culture of sexism), but Alanna doesn’t let them boss her around. 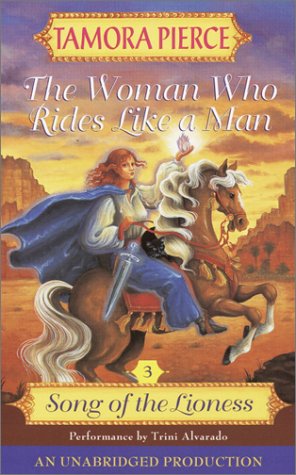 Anti-sexism: I know there’s probably a better word for this, but I can’t think of it. Tamora Pierce deftly handles the issues of sexism and misogyny that are engrained in both cultures–Tortallian and Bazhir. Not only does Alanna become the first female shaman, but she promptly trains two young, Gifted girls as her replacements. Alanna being Alanna, she’s not satisfied with just that, so she starts a new school to train Gifted Bazhir boys and girls. Alanna refuses to accept the status quo, but her vigor is tempered by her apprentices, who remain loving and respectful of the culture in which they were raised.

George. George, George, George. He will always be a bonus factor in every book he shows up in. It’s a little ridiculous how much I love him. Anyway, later in the book Alanna leaves the desert and goes to visit George. They reevaluate their relationship and (after a tasteful cutaway) have lots and lots of sex.

The Bad: Jonathan. I’ve never been a huge fan of the prince. He’s arrogant and conceited, but he’s also charming. Worse, he knows that he’s charming. He takes Alanna and their relationship for granted throughout this entire book. Not only is he careless, but on several occasions he was downright mean. It broke my little heart.

The Verdict: The battles are a lot better in this book, and it’s great to watch Alanna master her magic instead of fearing it. This personal growth sets her (and the reader) up well for the windstorm of crazy that takes place in the final book: “Lioness Rampant.”